Yesterday I've been playing with a piece of leather to see if I could make something for my Voodoo Album.
It isn't finished but so far I seem to be heading towards something worth the effort.

Let me know what you think! 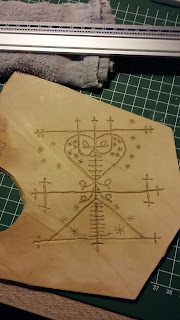 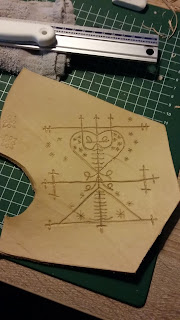 Email ThisBlogThis!Share to TwitterShare to FacebookShare to Pinterest
Labels: CRAFT

Part II : Fire on the Bayou

My review on Amazon and Goodreads :

At first I wasn't sure about this book. I had a hard time getting into the story and relate to the characters. However, by the time I reached chapter 5 it finally started to "click" with me.
The cover tells me it a trilogy, Goodreads tells me it's part II, but I've read it as a stand-alone.
It is a rough story about life, what it can do to a family and how, sometimes, there is nothing you can do against the inevitable.

+ There are very strong characters in the story.
- It takes a long time to get into the story. 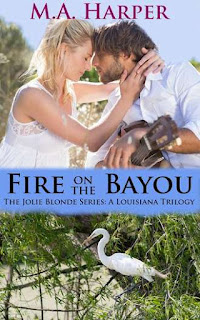 I finished this page because I knew exactly how I wanted it to turn out.
I don't feel like I need to go by page number, I rather just work on those lay-outs of which I'm sure how I want to finish it.

Today I introduce to you "The Baron", or at least three of him :


I would like to enter this lay-out into the next challenges :

1) Simon Says Stamp Monday Challenge : So Glossy!
The challenge inspired me to try out some glossy accents and it turned out to be just what I needed.
Posted by Unknown at 11:09 2 comments:

I didn't make as much progress on the album as I was hoping.
In fact, it went so much slower than I wanted to that I decided to go for a different approach. Instead of making the album page by page, from the base up to the very last embellishment, I went a made all the base pages in one go.
I prettty much spend my evening distressing 12x12 papers for the background without knowing what I'm going to put on there. I definitely hope this won't backfire on me later on during the project! 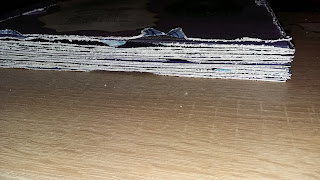 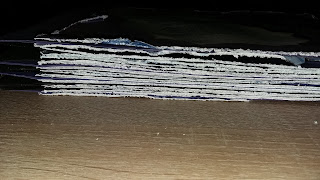 It is a bit disappointing that it turned out to be 10 pages because I honestly thought I was going to end up with more. As a matter of fact, I'm pretty sure this is not going to be enough at all!
But for now I'm just going to work with these and when I need more I'll have to go find another paper pad of he same colors used in this one to make another set of base pages.

The next step will be sorting out the picture's, divide them on the pages, decide how to incorperate them, which big embellishments to place on which page, the voodoo tags for example, and go from there.

Every now and then I get really, really excited when I get some new crafting supplies.
Today is such a day.
I ordered some new dies for my Big Shot and I can honestly say, they did not dissappoint! 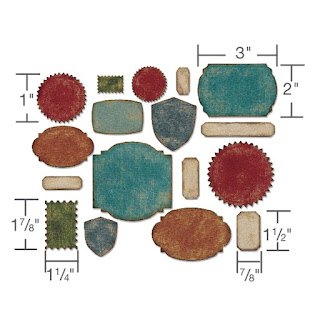 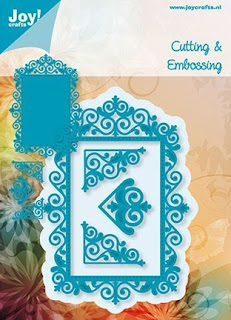 I can't wait to start playing with my new toys!!!

Email ThisBlogThis!Share to TwitterShare to FacebookShare to Pinterest
Labels: CRAFT

A sinister magic is sweeping across Nash City…
To Fiona Moon, it’s just another day at work. And some days, well, they’re a helluva lot worse than others. As a member of the elite Black Blade Guard, Fiona is tasked with hunting down the most-dangerous Paranorm criminals. To find out who is kidnapping mages and sucking the life energy from their bodies, she has to work with the one man that embodies everything she despises.
Master Necromancer Ian Barroes, a rich professor of Necromantic Studies, wants only one thing in this world… Fiona.
They each hold secrets that could destroy them, but that could also be the key to destroying the evil Voodoo priest, Bokor. They must learn to trust each other and track down Bokor before more innocent lives are lost. When Fiona becomes a target of the evil madman, she is lured into his trap. Now, she and Ian have to fight for survival… and their very souls.

A little over two hundred years ago in the year of technology called 2012, the North and South Poles started shifting. It was gradual at first and lasted a couple of decades. When it was over, the shift wasn't exactly ninety degrees, but it was close enough that east became north, north became west, and so on. The shift caused a climatic Cataclysm that pounded the world with storms, earthquakes, and other natural disasters for more than forty years.
Damn Mayans.

Whole cities were destroyed, and governments crumbled. Famine ran rampant. Widespread panic caused wars, which killed even more than the natural disasters and starvation. When the smoke and weather finally cleared, the world had changed drastically. What had once been the Eastern United States was now a peninsula called Appalachia made up of a range of mountains in the west and bordered by the Atlantic Ocean inn the north and east, as well as the newly formed Mississippi Sea in the south. Only two major cities, what had once been Nashville and Atlanta, remained partially standing. From those ruins rose the autonomous city-states of Nash and Atlanta.

For more than fifty years after the start of the Cataclysm, every city, town and community was at war with each other and internally. Finally, the Paranorm Council of Elders stepped in to bring peace and unity. While the two city-states were completely autonomous in rule, they were allied under the Council of Elders along with three other city-states - Okie City and Sanlou to the south, and New Winnipeg in the west.  Many areas in the south and west had resisted the Council. Some set up legitimate governments of their own, but many other were ruled by warlords and tyrants.

The city-state of Nash claimed jurisdiction over several small fishing, farming and industrial villages throughout southern Appalachia, but the main part of it was built around the heart of the original city and separated into two main parts - Nash City and New Nashville.

The walls of Nash City rose up out of the ground like a lumpy, gray fortress. Sentries marched along the top. The path and most of the materials for the walls of Nash City had once been a vast highway that looped around downtown Nashville. But when the Cataclysm began, mages and other paranorms used it as the building blocks of a wall to protect the people who huddled within.

*****
I absolutely love the setting. What I wrote above is really just a part from the book where the current situation is explained. But during the story you come to realize that the writer did a great job in figuring out all the details and consequences of the Cataclysm. And yes, I'm a sucker for details. The main character is Fiona Moon, one of the three Moon sisters, and she is a kick-ass Black Blade Guard. The story of the Moon sisters is just as well thought off as the setting is. Most of the characters I came across are in fact quite interesting. Even though it is a Romantic 18+ paranorm novel it does have a great background story. At the moment I've only read the first part, Voodoo Moon, but I will be reading the second part soon enough.

Email ThisBlogThis!Share to TwitterShare to FacebookShare to Pinterest
Labels: BOOKS

I have finally finished the front cover of my Voodoo People Album. As I mentioned earlier on it will hold picture's of our L.A.R.P. group the Voodoo People while we were playing at Ravenskeep Adventure's.

One of the things I really wanted to add was a Raven Skull and through our network of larpers I found someone who made a 3D print of one for my project. Combined with some lovely paintwork of my husband I had found the perfect center piece for this project. 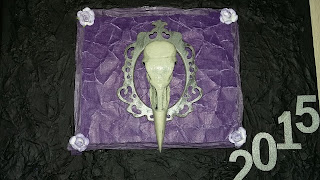 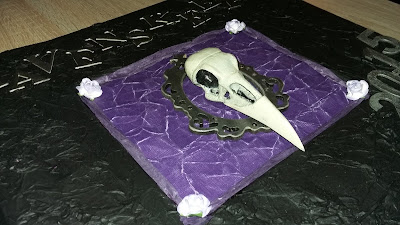 And then we move on to the Inside of the Front Cover :

I have made less picture's of the inside but I did turn out as wicked as the outside.


I would like to enter this finished project in three different challenges :

2) Link : Simon Says Stamp Wednesday Challenge - Anything Goes!
I don't have any Lawn Fawn products so I couldn't use any on this weeks challenge.

3) Link : Frilly & Funkie Challenge Blog - Something Wicked
I definitely think this project would qualify as something wicked, don't you?

Picture of Graveyard made by : Scarlett Bohemian Fotografie
Posted by Unknown at 23:18 2 comments:

Part of our Geeky Family undertaking is our Etsy Shop where some of our crafts are being sold.
Our main focus is the leather masks which can be custom ordered to any design you wish.
They are all handmade and finished with a layer of varnish making them splash-proof. 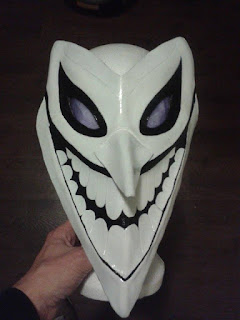 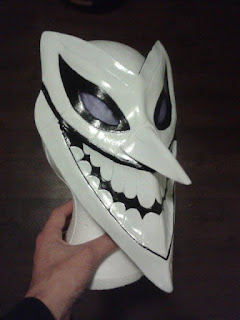 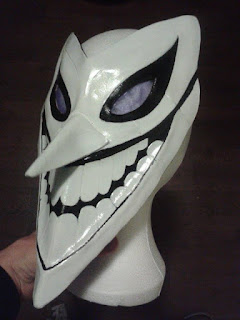 It might be a bit early but I've just finished wrapping up the first load of christmas presents for my nieces in the UK.

I found some lovely gift bags and combined them with butterfly wrapping paper and tags. Instead of the usual twine I used some pink ribbon for the girls.
On the gift bags I used some Tim Holtz Alpha's for their names and finished it off with a layer of varnish.

One of my nieces is having her birthday shortly before christmas so I wrapped her little gifts in a cute, pink giftbag designed as a purse. I added some cardboard Alpha's for her name, pink & purple offcours!

Email ThisBlogThis!Share to TwitterShare to FacebookShare to Pinterest
Labels: GIFTS

Within Temptation
"Our Solemn Hour"

In my darkest hours I could not foresee
That the tide could turn so fast to this degree
Can't believe my eyes
How can you be so blind?
Is the heart of stone, no empathy inside?
Time keeps on slipping away and we haven't learned
So in the end now what have we gained?

Are they themselves to blame, the misery, the pain?
Didn't we let go, allowed it, let it grow?
If we can't restrain the beast which dwells inside
it will find it's way somehow, somewhere in time
Will we remember all of the suffering
Cause if we fail it will be in vain